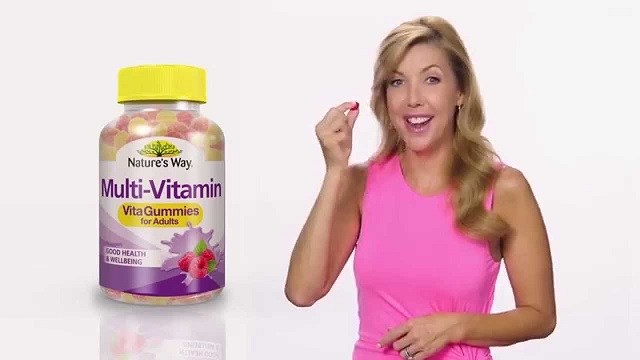 Nature’s Way Vita Gummies embed vitamins in delicious sugar filled gummies. Shouting about the vitamin benefits of a food while blithely ignoring the other 99.99% of the product is not a new tactic in the processed food industry. Take Heart Foundation approved, 4 Health Star, Milo (27% sugar) for example. But sweets laced with vitamins are not an improvement on either sweets or vitamins.

I guess you could (almost – at a very big stretch) justify that kind of marketing if there was any evidence (whatsoever) that the average Australian needed any more of those Vitamins or minerals. Vitamin supplements have only been part of our food supply since just before the second world war. Prior to that our Grandparents and their grandparents managed to struggle through life without any supplementation at all.

The need for vitamins only arose because two hideous diseases reached epidemic proportions in the early part of the 20th century. In south-east Asia beriberi was rampant because (it turned out) Europeans had started using steam driven mills to turn brown rice into white rice (and in the process stripping out Vitamin B1). And at almost the same time in the southern United States pellagra was inflicting mass agony because Europeans had decided that treating raw corn with lime (a process the Indians had used for millennia to activate the Vitamin B3) was a waste of time and money.

South East Asians derived almost all their nutrition from rice at the time and poor farmers in the southern United States derived almost all of their food from corn. Messing with those two fundamental food sources resulted in mass deficiencies which led to disease. The only other two significant deficiencies which have (in modern times) resulted in widespread disease are scurvy (if you happen to be locked in a boat without access to anything but dry biscuits and rum for six months) and rickets (if you use too much sunblock).

The reality is that the overwhelming majority of people living in Australia today have no more risk of being functionally deficient in any vitamin than I do of becoming the Queen (of England that is). Our bodies are extraordinarily efficient at extracting exactly what we need (and no more) from our food (mostly from meat) and excreting the excess. If you are inclined to the I’ll-top-em-up-just-in-case persuasion, the research suggests you are just flushing your money away.

One of the most thorough (but by no means, not the only) recent studies was the Physicians Health Trial. In that study, 14,641 US doctors were followed for 10 years while they took either Vitamin E or Vitamin C supplements, the two vitamins which are heavily promoted as having anti-oxidant (and therefore heart disease related) benefits.

Half of the doctors were actually taking placebos instead, but neither they nor the folks assessing the results knew which was which. The double blind (no-one knew who was taking what), randomized nature of the trial (together with its large size and long duration) means that it is very high quality evidence.

The point of the trial was to figure out whether the supplements had any effect at all on heart disease and stroke outcomes among the participants. And what they found would have been very disappointing for the supplement industry indeed. There was exactly no difference between the heart disease outcomes for any of the groups.

The Vitamin E folks had just as many heart attacks as the Vitamin C folks. And they had just as many as the folks taking nothing. The resounding conclusion from the study is that if any of the participants had been paying for their vitamins, they would have been well and truly wasting their money (for ten long years). While we certainly need Vitamin E and Vitamin C, it seems shoving more of it in our mouths changes absolutely nothing (except the bank balance of the folks selling the supplement).

Similar high quality trials on Vitamin D, Calcium and Vitamin B supplements have arrived at exactly the same conclusion – don’t waste your money. And this is why (in the US at least) supplements must carry this warning:

“these statements have not been evaluated by the Food and Drug Administration. This product is not intended to diagnose, treat, cure, or prevent any disease.”

Vita-Gummies (at 23c a throw) are about 8 times the price of garden variety gummi bears (which are aren’t laced with precursors to expensive urine) but they do contain just as much life sapping sugar (something which unfortunately ends up around our waist and not down the drain).

Selling sweets as health food (to children and their parents) when they are in reality a package of pure sugar is unbelievably perverse.

Unfortunately nobody is breaking any laws telling us that a sugar loaded sweet (with a vitamin chaser) is good for us. And so the marketers go to town. But where do we draw the line? Chocolate coated carrot shavings, sold as Vegies the Kids Will Love (no, Nestle that is not a suggestion)? This pathetic game must stop. It’s time for truth in labelling. Surely our children are worth that much.