If you change nothing, nothing will change
6 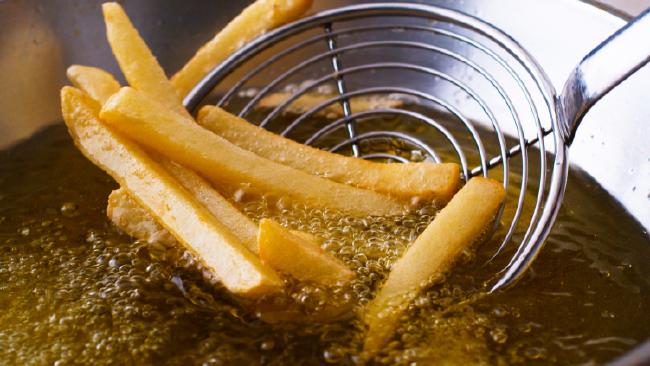 When they interact with oxygen, they release neurotoxic, DNA mutating chemicals which are known to cause cancer (at least).

Recent improvements in measurement technology have now thrown a spotlight on the quantity of these chemicals released by normal use. And the results are truly terrifying.

Cheap vegetable oil made from seeds (canola, sunflower, corn, safflower, grapeseed, rice bran and soybean oils) is a new addition to the human diet. Unlike animal fats and oils made from fruit (olive, avocado and coconut oils), they’re very high in polyunsaturated fats and in particular something called an omega-6 fat.

A recent study found that when seed oils containing these fats are heated at a normal cooking temperature (of 180 degrees celsius), they create highly toxic chemicals known to be involved in cancer causation.,

And each time the oil was re-used the concentration increased massively. The study showed that by the fifth day of oil re-use, it had five times the concentration of these chemicals that it had on the first (which was already alarmingly high).

But worse than that, the researchers also made the point that all they could measure was the amount of these chemicals left in the oil. Since they are highly volatile, they are constantly escaping into the air around us when the food is being cooked.

According to another recent study, it is likely that this volatility explains the stubbornly high rates of lung cancer among women in Asian countries (where smoking is rare among women, but wok frying with Canola oil is a daily task).

Those toxic molecules are dangerous because they are interact destructively with our DNA. This significantly increases the chances that cancer will develop.

These seed oils are now a core component of our food supply and Australians are sicker now than at any time in our history.

The chronic disease tsunami is upon us.

Every day there are thousands of teenagers standing over vats of frying canola oil for eight hour shifts at every fast food restaurant in this country. Every day, there are people cooking with high temperature seed oils in woks and frying pans. And every day there are industrial quantities of heated seed oil being poured into commercial baked and frozen foods.

A century ago, exactly none of these fats were added to our food supply.

Every day 312 new cancer sufferers are diagnosed in Australia. That this is allowed to continue when the science is so clear on the likely cause, is not merely a shame or an embarrassment. It is an outrage and a tragedy.

It is reasonably safe to assume all the fat in processed food comes from seed oils. The good news is that this only applies to food made by others (and usually shoved into a packet with a picture of real food on the front).

Nobody can stop you making and eating real food. All you need is a little know-how. 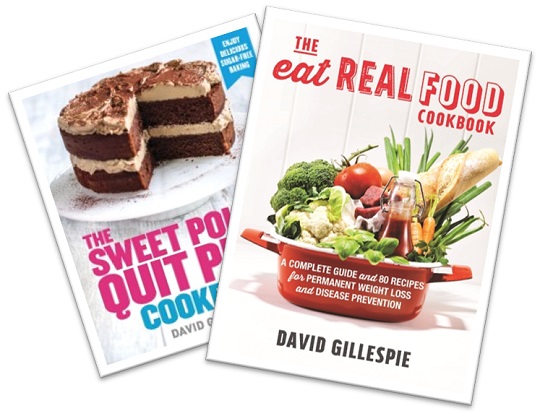 Get the new Eat Real Food Cookbook OR the Sweet Poison Quit Plan Cookbook OR BOTH for 25% OFF.

Both books are of course signed by David

When you first quit sugar, its handy to have some stand-by recipes.  Grab this starter set of recipes from the book absolutely free.

These recipes were developed by Peta Dent. Peta is a proper chef, so the recipes are full-on, professionally developed desserts and sweet treats fit for inclusion in any TV chef’s collection. This doesn’t mean they’re hard to make or use bizarre ingredients (Guatamalan chia seeds anyone?).

Peta has cooked each of the recipes dozens of times, trying different combinations and adjusting the quantities until we (and a random selection of sugar-addicted and sugar-free guinea pigs) were happy with the end product. I’ve tasted all of them. The quality control was hard work, but someone had to battle through all that ice cream and cake (okay, I had a little help from the kids!). Lizzie has also made a lot the recipes to make sure an average person in an average kitchen with an average supermarket down the road can pull them off . They’re spectacularly good and we are very excit-ed by the sheer abundance of high-quality fructose-free options this book represents.

All of David’s books are available from this site. And each book purchased is personally signed by David. If you buy multiple copies of books you will receive multi-buy discounts and keep an eye out for sugar themed or oil themed bundles which also offer great discounts.

All of the books are also available electronically (obviously those aren’t signed).

In addiction to the books there is a great range of electronic resources (such as guides to the sugar content of common foods) available in the Resource Store. 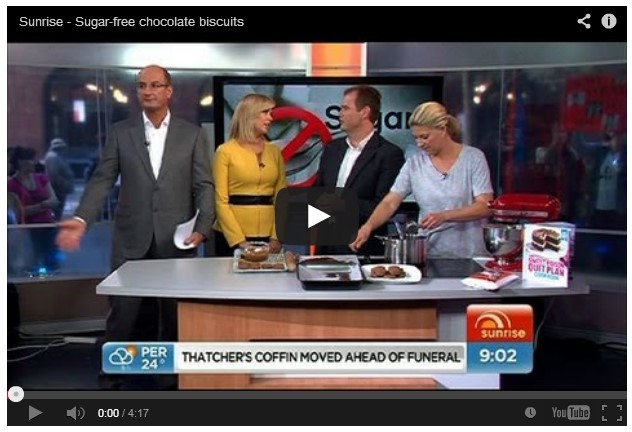 Chef Peta Dent and David talk Kochie and Sam from Sunrise through the delicate task of making dextrose chocolate biscuits. 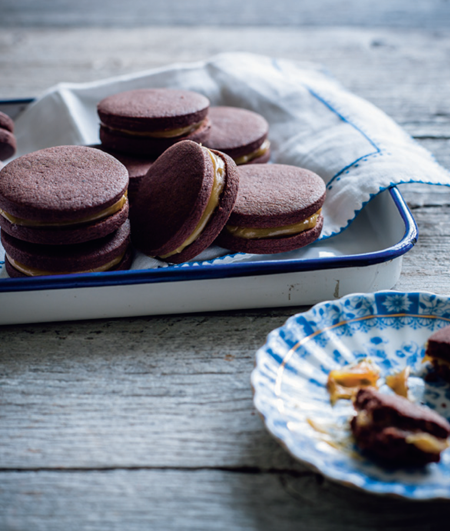 The creamy caramel centre between these chocolate-y biscuits will win over any sugarholic. 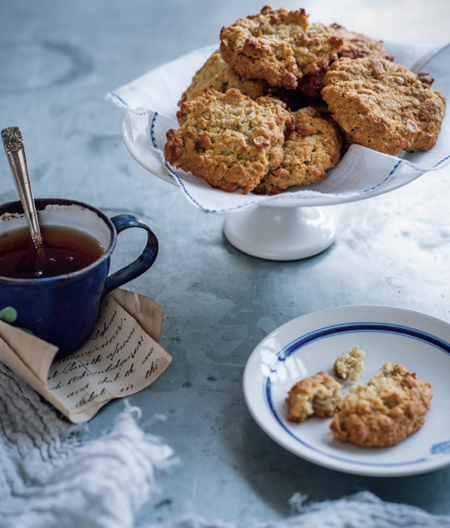 Wholemeal flour adds a slight nutty taste to these traditional biscuits, but you can substitute it with plain flour if that’s what’s in your pantry. These are best eaten on the day they are made as they will soften a little when stored but they do freeze very well.

» VARIATION:
If you prefer a more cake-like texture, roll the mixture into balls, then only flatten them slightly before baking. For a crisper result, squash the dough flat before baking.

Living in Queensland it gets very steamy during summer. It’s great to have a refreshing iced treat like this in the freezer to cool down on those balmy summer days – and nights.

» VARIATION:
If you do not have an ice cream machine, use hand-held electric beaters to beat the sorbet every 2 hours, returning the mixture to the freezer each time, until the mixture is frozen.

» VARIATION:
If you like, knead some finely grated orange zest into the dough before baking. 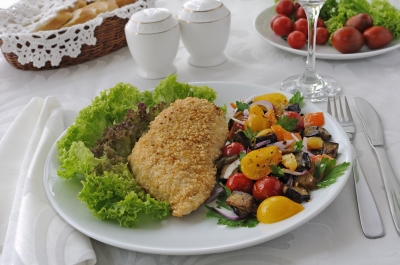 Not everyone has, or wants, a deep-fryer. Before we discovered the joys of frying in animal fat, Lizzie would make this version of oven-baked chicken schnitzel for special occasions. It is a little time-consuming, but the schnitzels freeze really well after they’ve been cooked, so you can make a big batch and have some for another time; all you need to do is resuscitate them in a frying pan when you want to use them. Feel free to experiment with the recipe – try parmesan instead of tasty cheese, different herbs, garlic, some chilli, or both.