Attack of the Chocolatier 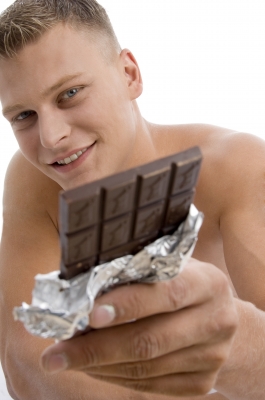 On Sunday, ABC’s Ockham’s Razor program aired a piece by a chap called Chris Forbes- Ewan. Chris is a nutritionist who works for the Defence Science and Technology Organisation (DSTO) in Tasmania. He has spent the last few years making high melting point chocolate for DSTO. This stuff allows Aussie troops to still enjoy a choccy even when sitting in the hot Arabian sun.

DSTO says they “work closely with industry … through a range of … mutually beneficial arrangements.” Interestingly they have been ‘working closely’ with Nestle on Chris’s project. DSTO explain “Nestlé’s transformation from a general food company into a health, nutrition and wellness company meant that they were more closely aligned to DSTO in the area of nutrition.”

Nestle has been transformed into a health and wellness company? I must have missed the memo. I’m sure DSTO (and Chris) are not in any way influenced by ‘closely working’ with Nestle for years, but it would have been nice to disclose the relationship so we could make up our own mind.

It’s true I have no formal qualifications in nutrition. But apparently none are necessary, beyond being a human that eats. And I understand that to someone (like Chris) who has worked in this area for ‘more than two decades’ it could be a little confronting to deal with someone qualified by nothing more than a thirst for knowledge.

After reading 208 pages of summarised research in Sweet Poison, he decides the thing worthy of attack (beyond my credentials) is my claim that we now get almost 20% of our calories from fructose.

For the record the average Aussie consumes about 50 kg of sugar a year. On top of that, they gulp down approximately 10 kg of sugar in fruit juice concentrate (used to sweeten ‘healthy’ food like Nestle’s fruit fix), honey and fruit juice. The fructose half of this equates to 16.4 percent of the recommended adult male’s diet (2,000 Calories per day) or 18.2 percent of an adult female diet of 1,800 Calories. To me, that looks like ‘almost 20 percent’ and a lot more than the 6 percent Chris calculates.

But even if he were absolutely right, it wouldn’t change my argument one little bit. Unlike Chris (and coincidentally Big Sugar), I don’t believe (and there is no credible research to suggest) that there is any safe level of fructose consumption (beyond that which is contained in two pieces of fruit per day).

Even Chris concedes that “many Australians do eat excessive amounts of sugar, and would do themselves (and their waistlines) a favour by reducing sugar intake.” His real concern seems to be that people won’t voluntarily give up sugar, reducing his argument to: I know it’s bad but people won’t change, so let’s not worry about it.

His only other concern was about a human trial (of fructose feeding) I mentioned in the book. It had to be abandoned due to some of the participants suffering heart problems.

I mentioned the study to make the (I thought, rather amusing) point that humans have better lawyers than rats which is why (perhaps) there are less human studies on fructose. But Chris claims that I completely misinterpreted the study’s findings. He implies that the heart problems were no more attributable to fructose than to starch (the two diets used in the trial).

I didn’t do the study, so I have to rely on what the researchers themselves concluded. They say that even though the link between the fructose and the heart attacks could not be proven, the probability that it “was due to chance was was < .0005” (less than five hundredths of a percent).”

Sweet Poison is stuffed to the brim with examples from the (over 3,000) studies that show the damage being done by fructose, but Chris doesn’t have problems with any of the rest. This one (somewhat oblique) reference is the only one he questions.

He has however personally found 12 studies which show feeding people fructose has no effect or is beneficial (no less). He doesn’t cite (or describe) any of them, so we’ll just have to take his word on that. Perhaps next time Chris, you could give us some clues? Maybe even mention the name of the researchers? Ockham’s Razor is a science show after all.

Despite his newly discovered (and unnamed) studies, Chris finishes his piece by saying that “recent studies suggest that high fructose intake may increase the risk of conditions such as gout, kidney stones, non-alcoholic fatty liver disease, high blood pressure and diabetes, and may also lead to blood lipid profiles associated with greater risk of heart disease.” Oh ok, so we agree then?

I’ve put the evidence out there and the best a chocolatier-come-critic can come up with (after six months) is (incorrectly) suggesting I misinterpreted an abandoned study from 1984?

Sugar purveyors (including the DSTO’s partner, Nestle) have billions in revenue and resources coming out their ears. Sweet Poison cites endless studies and there are even more on my blog. But so far not one study has been cited which contradicts any of it.

If the science is wrong and fructose is harmless (as Chris starts to imply but then changes his mind), then surely it can’t be that hard to prove. Just cite some credible studies.

Coke offers me a job (sort of)

Coke offers me a job (sort of)