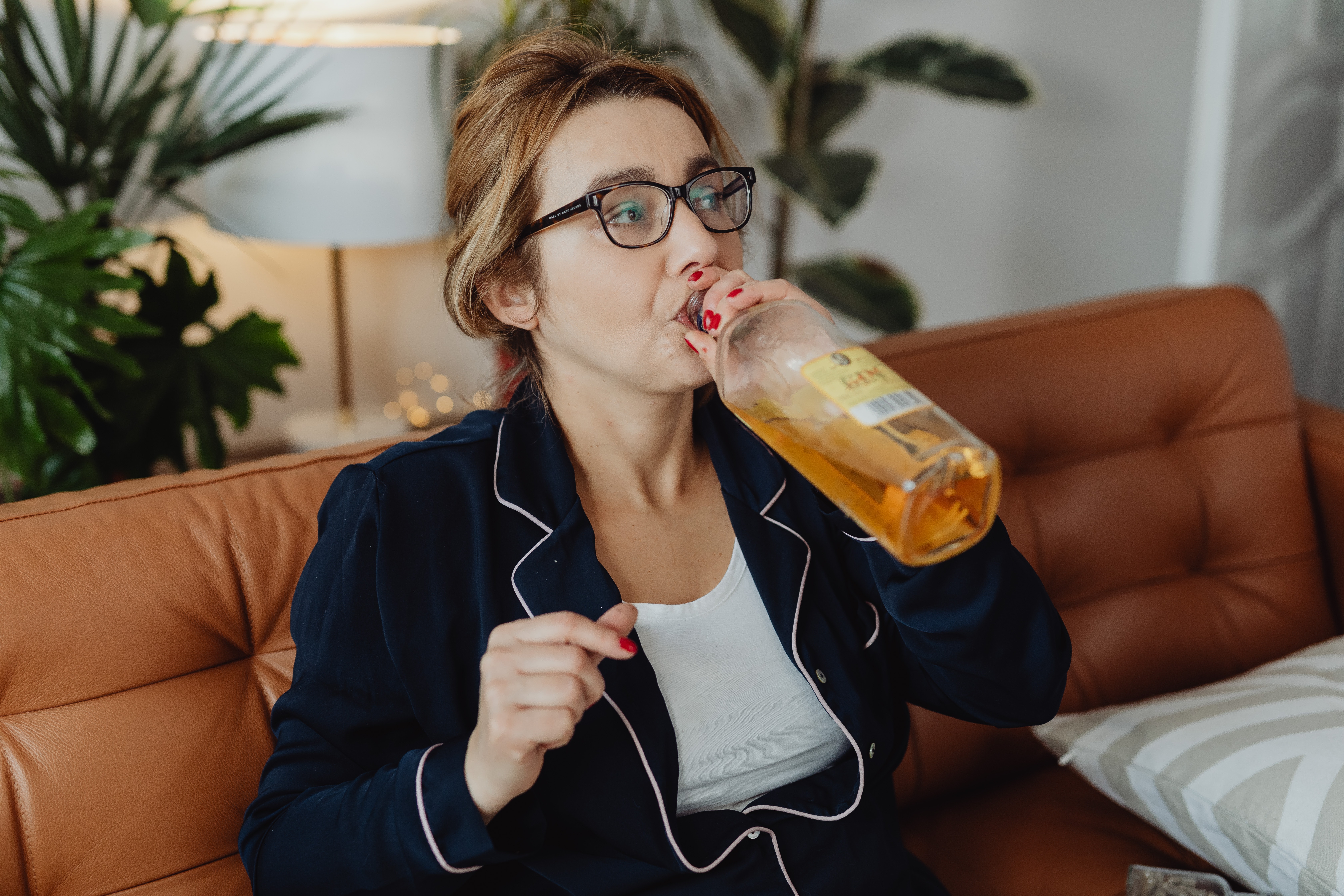 Australia may have avoided the worst of COVID, but the lock-down mentality may have driven many of us into the arms of one of the hardest addictions to break.

Last quarter, Australia’s economy suffered the third largest decline since records began (-1.9%).  The worst was in June 2020 (-7%) and the second worst was in June 1974 (-2%). But there was one sector laughing all the way to the bank.  Retail alcohol sales were not restricted at any time and they have had a rocket strapped their back since the start of COVID.  They were up almost 30% in 2020, and 2021 looks like it will be even more profitable by the time the Christmas surge hits the cash registers. 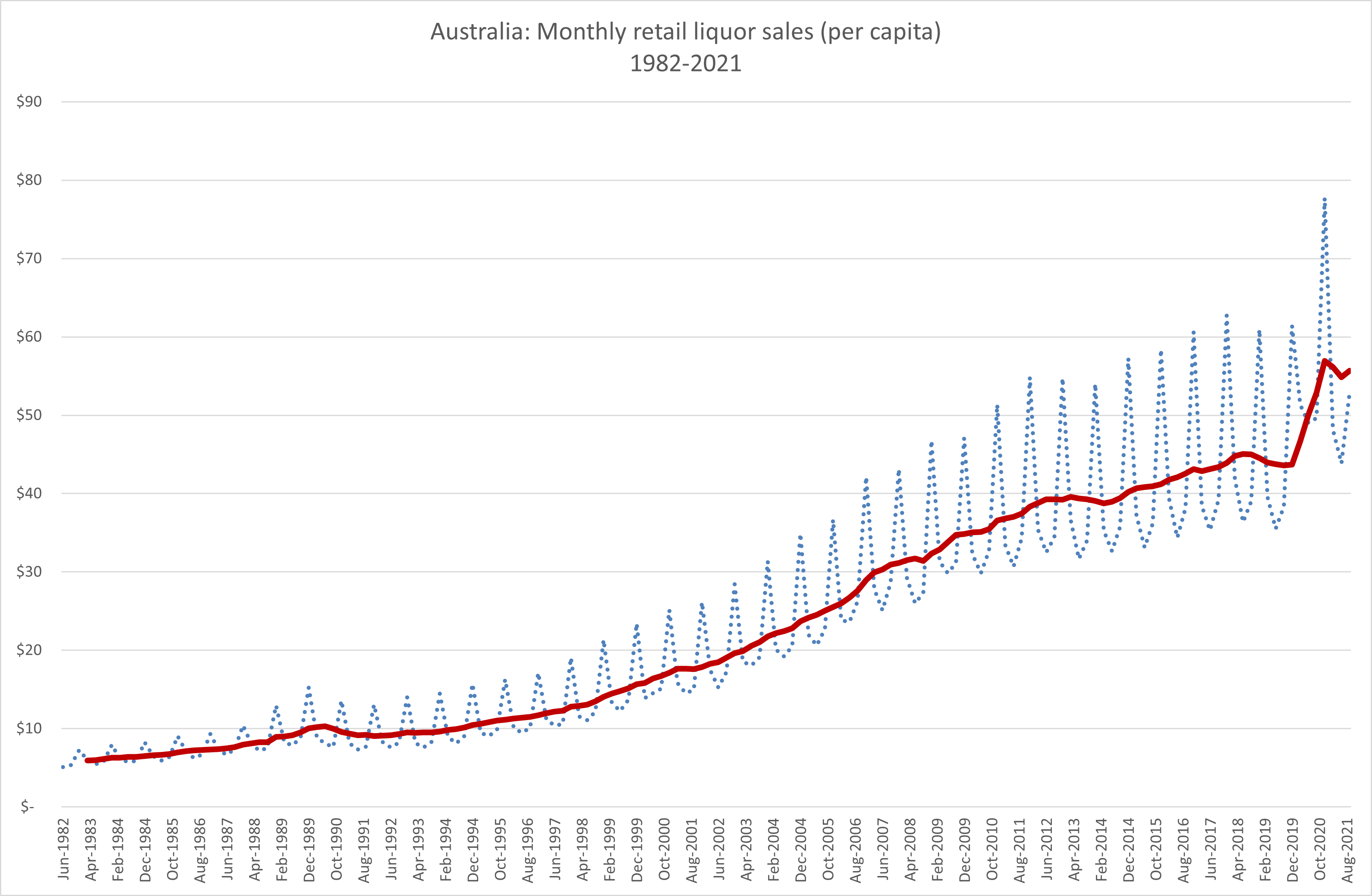 Even before COVID, Australia had a drinking problem. Thirty-five per cent of all Australians treated for substance abuse were seeking that treatment for alcohol addiction. But the COVID driven explosion in home consumption is driving massive increases in the diseases that flow from alcohol addiction. Calls to the National Alcohol and Other Drug Hotline doubled between early 2019 and early 2020, and ABS surveys similarly found that people exhibiting signs of anxiety almost doubled.  Calls to mental health hotlines like Lifeline and Beyond Blue have set new records every month, with total volume up around 30%.  It is also probable that the explosion in in-home alcohol consumption is driving unprecedented increases in assault and domestic violence.

In the last two years, we have all experienced a significant increase in uncertainty and stress. We like alcohol because it is a stress reliever. It directly stimulates the release of extra dopamine, producing two to three times as much as our normal level. This acts as a temporary cure for DDS, the low dopamine state which causes ADHD-like symptoms, anxiety and depression. Initially alcohol stimulates dopamine production, making us want it more. But if the dose is big enough, it eventually sedates us. It does this because, like anaesthetics, it interacts with GABA receptors. GABA is our ‘calm down’ hormone. It turns off dopamine and allows us to relax.

Teens, Addicts and People under stress are more susceptible

The sedative effect of alcohol is highly dependent on the amount of GABA we have available. Teenagers have less GABA because it is dialled down during puberty.  We also have less GABA when we are stressed or addicted because the mechanism that allows us to tolerate higher dopamine levels also shuts down GABA.  This low GABA state enhances the addiction potential of alcohol and makes consuming more dangerous for us and the people around us. This is why teens and alcoholics can drink very large amounts but not appear to be drunk. Don’t be fooled, they very much are.

How much is too much?

If we are not a teenager or suffering DDS due to stress or addiction, two to three drinks in an hour is sufficient to lower the average adult male’s impulse control (make him feel a little disinhibited). The average adult female can get there on one to two drinks. They are what most of us would describe as ‘tipsy’. They’ll have a blood alcohol reading somewhere between 0.03 and 0.12. They are probably too impaired to drive because their response times, attention and judgement will be sub-par.

If they have an extra drink in that hour (up to five for men and up to four for women), then they will begin to experience emotional instability, start to lose their balance, start to experience blurry vision and start to feel drowsy. Their blood alcohol reading will be somewhere between 0.09 and 0.25. In other words, they are visibly drunk. This is the point where good friends would be ordering a cab and bundling them off home.

Drink any more than that in an hour and you will probably not be able to stand. If you can walk, it will be a stagger and you will be extremely confused. You will probably forget most of what happens from this point onward. In this way, the potential harm from alcohol is somewhat self-limiting. Before a drinker is in a position to do themselves and others real harm, they’ll probably be incapable of any coordinated action and fall asleep.

But different rules apply to adolescents and DDS sufferers

People between the ages of fourteen and 25 would say they can drink way more than that before they are uncoordinated or pass out. And they’d be right. We’ve known for at least two decades, that adolescent rats and mice get more bang for their buck from booze. They become socially disinhibited and find alcohol more rewarding, more quickly. They are also capable of drinking significantly more before their ability to control their body is impaired. And they can drink much more before they pass out. Their blood alcohol readings are exactly the same as adults and their judgement is just as impaired as adults but their body is capable of functioning normally and they will not suffer a (somewhat protective) bout of drowsiness or unconsciousness anywhere near as quickly. This is why, all of a sudden in your early to mid-twenties, you can no longer party like you used to.

I’m talking about rats and mice because picky do-gooders think there is something wrong with doing experiments aimed at getting teenagers so drunk that they can’t stand up – sheesh! We are however reasonably certain that the same thing applies to humans because there is a rare 1983 study in humans which produced the same results. In that study, the authors noted that they ‘were impressed by how little gross behavioural change occurred in the (eight- to fifteen-year-old) children . . . after a dose of alcohol which had been intoxicating in an adult population.’

Alcohol enhances the effect of GABA. In a healthy adult, this has a sedative effect. It impairs our motor-sensory control and makes us drowsy. But because an adolescent has repressed GABA, it has much less motor effect.  The same applies to someone who is suffering from DDS due to addiction or stress.

Someone with impaired GABA can still operate their legs and fists effectively – even with significantly impaired judgement and impulse control – and can keep drinking well past the point anyone else would be forced to stop (by unconsciousness). This is likely to be a big part of why, according to the latest Australian National Drug Survey, the average 20–24 year old is 35 per cent more likely than a 25–34 year old to have been a victim of alcohol-related physical injury in the last twelve months.

Questionable karaoke and dancing on tables are not the worst we can expect from booze. Alcohol can be an extremely addictive and dangerous drug.  Our society needs to understand and accept this if we are to interact with it safely.

Isolation may have saved us from the worst of COVID, but if we do not act now, the long tail will be endemic addiction and mental illness, the likes of which few human populations have ever endured. The early signs of the coming disaster are more obvious every day, but they need to be read, understood and acted on. Our governments were swift to lock us down. Now they need to be equally swift to act on alcohol abuse.

Photo by Karolina Grabowska from Pexels 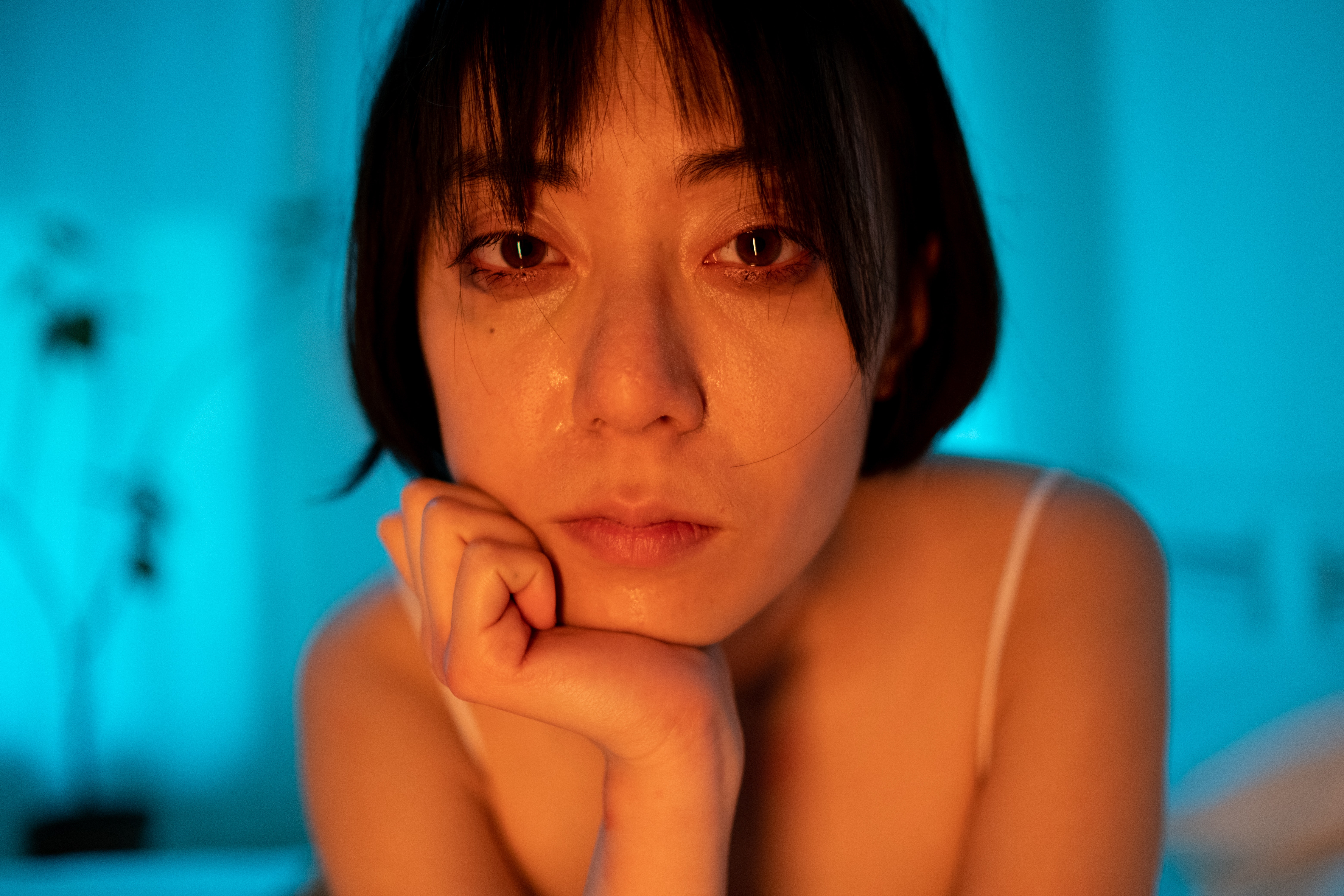