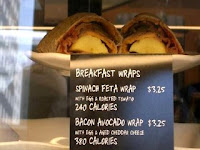 The Victorian government is forcing fast food restaurants to tell us how many calories are in their meals. Premier Brumby says this will “drag back” the “runaway train” of Type II Diabetes. But the science says there isn’t any real point to showing us how many calories are in a burger (or anything else). And the evidence (from places that have already been there, done that and bought the T-shirt) is that it doesn’t make the slightest bit of difference to what we eat anyway.

Most food contains 4 calories of energy per gram of food. The exceptions are fat (which has 9 calories per gram) and alcohol (which has 7). So a difference in the calorie content of two similar weights (or serves) of food really is just another way of saying one has more fat than the other (or more booze, but I don’t think anyone is worried about that at Macca’s).

We are exceedingly efficient at using our calories. The 150 calories in a glass of apple juice would let us ride a bicycle 8 km, but the same energy (in petrol) would only push a car 250 metres.

Our appetite control is also exceedingly efficient at making sure we don’t consume more calories than we need. Our hormones are so sophisticated they can even tell the difference between fat calories and calories from everything else (and adjust accordingly).

The science says sugar contains an appetite hormone disruptor (called fructose). With sugar in our diet, our bodies can no longer tell when we have had enough calories. Sugar gives our bodies permission to keep on eating and we don’t stop until we are physically restrained by the size of our stomach (or jeans). When that problem, well, passes, our broken appetite control gives us permission to keep eating until we’re stuffed again.

The result is that we are eating way too many calories, but fabulous as they are, our hormones can’t read a calorie sticker slapped on a board out the front of a KFC (even assuming any of us really knew how many we were supposed to be eating anyway). Our broken appetite control is the reason that Diabetes (and obesity) is a run-away train, not a lack of calorie labelling.

Because all a calorie really measures is (relative) fat content, the processed food industry isn’t all that bothered about calorie labelling. They’ll happily slap a calorie count on a can of soft drink (full of appetite hormone disruptor) because they know it comes out looking pretty good next to an equivalent quantity of milk (soft drink – 150 calories v unflavoured milk – 240 calories).

The sugar in the soft drink will make us want to eat more of everything but it’s the milk (which actually fills us up) that comes out looking sorry on a government mandated calorie counting sign. Sugar is effectively invisible on that sign. Indeed they could add more of the addictive substance and not materially affect the calorie count (especially if they use it to replace fat).

The Victorian plan is a straight copy of the calorie labelling laws enacted in New York City in mid 2008. But a Yale and New York University study on the effect of the laws (completed in October last year) showed the effect was exactly – nothing.

The researchers interviewed customers at multiple restaurants in four fast-food chains (McDonald’s, Wendy’s, Burger King and KFC). They collected 1,156 receipts from customers two weeks before the laws were introduced and four weeks afterwards. A similar population in a state without the law was used as the control.

The locations were chosen because of a high proportion of obesity and diabetes among poor minority populations. So if Premier Brumby’s runaway train theory was correct, these were exactly the people who should react to the signs.

In New York and in the control city, the average customer ordered a meal with 825 calories before the laws came into effect. Afterwards the New York customer had bumped their order up to 846 calories but the control customers were still ordering the same.

People were ordering more calories after signs were introduced! While that’s probably just a statistical anomaly, there’s certainly no suggestion the signs had any effect at all on what people ordered.

Never ones to be troubled by evidence of effectiveness, other states are now piling on to the Victorian bandwagon. The South Australian and New South Wales Governments think it’s a terrific idea and are rushing to implement.

Laws like this fit all the criteria for high visibility politics, so our elected representatives are drooling over them. Every time we walk past a Government mandated calorie sign (and ignore it) we can be reminded how much our politicians are looking out for us.

Everybody wins. The Pollie looks like he cares about our welfare and is on the job. The Nutritionists cheer them on because they are being listened to. And the food manufacturers know it won’t affect sales anyway.

The only loser is – well, ah – us. We will still get fatter and still get Type II Diabetes (but everybody knows those fat chickens will come home to roost on someone else’s watch) – bon appétit!

Are Sugar and Palm Oil really part of a “balanced breakfast?”

Are Sugar and Palm Oil really part of a “balanced breakfast?”