Another 5 Ways Fructose will mess you up 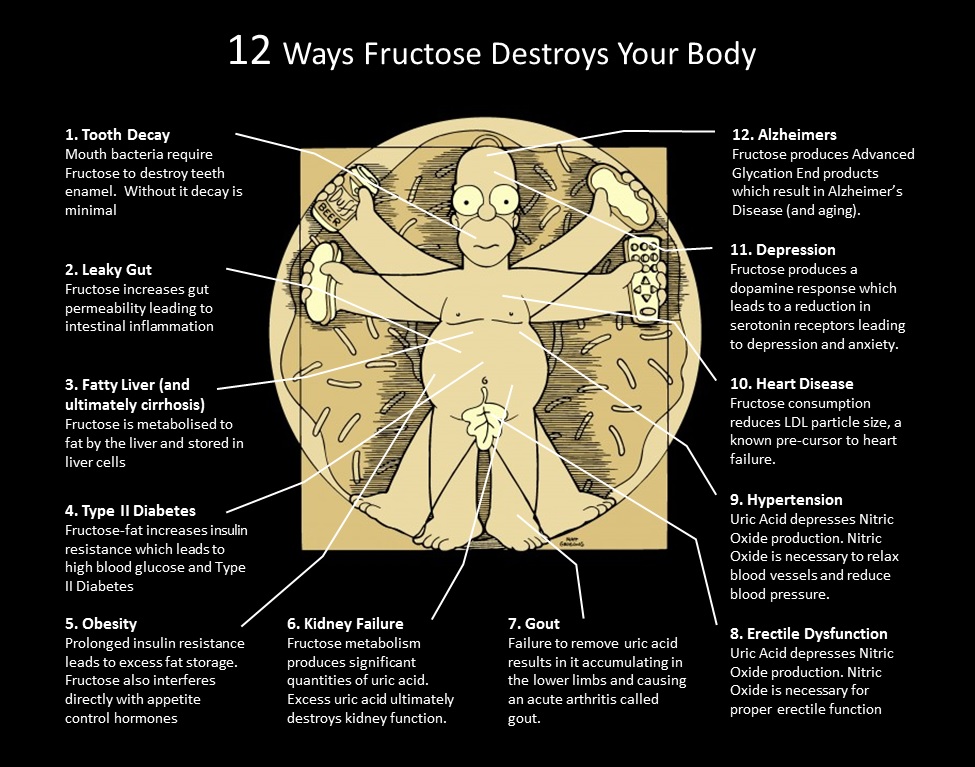 Around 1 in 5 US men now suffer from erectile dysfunction.  But one of the more recent studies tells us that one in two men with Type II diabetes will suffer the problem.

We know exactly what causes most of it.  It is a lack of nitric oxide, the same beastie that prevents high blood pressure (see next point).  When its production is suppressed erectile function becomes seriously impaired.  Viagra, Levitra and Cialis work by temporarily encouraging the production of nitric oxide.

We know that the opposite of Viagra is uric acid.  It dramatically reacts with our home grown nitric oxide thereby effectively deactivating it.  If we have large amounts of uric acid in our bloodstream, we can expect our nitric oxide to be rendered ineffective.  No effective nitric oxide means no erectile function.

Nitric oxide is a muscle relaxant which allows all the relevant sphincter muscles to loosen their grip enough to encourage inbound arterial blood flow long enough to be useful (so to speak).

It should also then come as no particular surprise that erectile dysfunction is so closely aligned with the other symptoms of overindulging in fructose, namely heart disease, obesity and type II diabetes and that the number of men needing assistance is also increasing as rapidly as the incidence of those diseases.

Perhaps if sugar were renamed anti-Viagra people might think twice about consuming it?

Trial after trial conducted between 1972 and 2005 has shown that we’re twice as likely to suffer from hypertension (high blood pressure) if we have high uric acid levels. Because uric acid deactivates nitric oxide, the smooth muscle cells of our arterial walls are less relaxed and therefore more constricted.

This means that the diameter of our arteries is smaller than it might otherwise be, and our blood pressure is higher (as any plumber will tell you, a thinner pipe means higher pressure). Recent human studies have conclusively demonstrated that all you need to do to give healthy volunteers hypertension is feed them fructose.

The reason for all the interest is that there are drugs (drug companies have much deeper pockets for this kind of research) that can be used to lower uric acid levels. Recent human trials have shown that those drugs do indeed lower blood pressure, but the evidence is clear that there’s a much simpler preventative measure for all the conditions related to uric acid – kidney disease, gout and hypertension. Don’t eat or drink sugar.

Throughout this section I refer to Heart Disease.  What I mean when I say that is all the diseases that are caused by Atherosclerosis (the blocking of arteries).  This group includes myocardial infarction (what most people call a heart attack), ischemic stroke and arterial thrombosis (the blocking of arteries in the limbs).  It affects all arteries but is most common in the big ones transporting the highest volume of blood, such as the ones near the heart and brain.

Some of the fat generated by fructose in the liver stays there (and causes the problems I set out in the last post), but the rest is exported into the bloodstream.  Because fat is not soluble in a water based solution like blood, it is transported by specialised proteins called lipoproteins (‘lipo’ is Greek for fat).

Lipoproteins come in a variety of sizes according to how much fat they can carry.  And scientists are now certain that having lots of large lipoproteins puts us in the lowest risk category for heart disease.  People like that are called ‘Pattern A.’  People who have lots of very small lipoproteins are called Pattern B and those people are the ones who are most likely to suffer from heart disease.

We use lipoproteins to transport the fat we eat as well as the fat we make from fructose. We know now that a diet high in saturated fat will produce Pattern A lipoproteins.  In other words, eating saturated fat lowers your risk of heart disease.  If you’re thinking this is the opposite of what we’ve been told for the last 50 years, you’re right.

We also now know that the most efficient way to convert someone from Pattern A (safe) to Pattern B (at risk) is to feed them fructose or put them on a low fat diet or, as many now do, both.  When we are fed fructose, the fat made from that fructose is exported from our liver in small dense lipoproteins.  Having more small dense lipoproteins converts you to Pattern B and sets you up for heart disease and stroke.

4.      Fructose makes you depressed (and anxious)

We can become depressed because things aren’t going well. If having your cat run over doesn’t alter your mood (one way or the other depending on how you feel about cats I guess) then you were probably built by aliens. But the science suggests how long we stay depressed has more to do with biochemistry than the state of Fluffy’s road-safety skills.

Food makes us happy (shocking, I know). Even seeing food improves our mood. This is because the anticipation of a feed, fires up the hormones responsible for how we feel. The sight (or smell) of food gives us a squirt of the pleasure hormone, dopamine. Dopamine focuses our attention, makes us think more clearly and helps us move faster and more effectively. It’s an important signal to our body that we are in for something good and we need to pay attention. And that was probably pretty handy in times gone by.  If you have to chase your food, being sharper was definitely an advantage.

Once we actually start eating, another hormone, serotonin kicks in. Serotonin is the ying to dopamine’s yang.  It’s our chill-out-all-is-good hormone. The serotonin makes us feel happier and less stressed. We relax, our mood improves (Fluffy will still be road kill, but we’ll feel better about it) and our minds can turn to less important things than eating.  Sex, another thing important for keeping humans around has exactly the same effect.  Anticipation produces dopamine and ‘achievement’ produces serotonin.

Researchers have known for a long time that severe depression is strongly associated with an inability to properly absorb serotonin in the brain. No (or low) serotonin absorption makes it much harder for us to come back from unhappiness. And this can translate into anxiety and depression if it’s sustained for long enough. The primary anti-depressant drugs available in Australia (Cipramil, Luvox, Prozac, Lovan, Aropax and Zoloft) all work by targeting the serotonin system. They give the brain more time to absorb the serotonin. Some other drugs (Ecstasy, Amphetamines and LSD) work by enhancing the amount of serotonin we produce (but you might find it tricky to get a prescription for them).

If all is well with our hormone system then severe depression should be an extremely rare disease. But it’s not. Depression is a major chronic health problem and it is getting much worse at a very rapid rate. Something is messing with our serotonin system and the evidence is starting to mount that the something is fructose. Fructose is the only carbohydrate which produces a significant spike in our cortisol levels. Cortisol is our stress hormone. It’s terribly handy for confrontations with unexpected bears (for example) because it ramps up dopamine (to focus the mind and sharpen the movements). It also rapidly increases the amount of dopamine we can absorb. But it does so at the expense of our ability to absorb serotonin.

We like dopamine. It is our reward drug. It tells us we are about to get good stuff (like food and sex). Frequent hits of fructose mean frequent hits of dopamine. This leads inevitably to fructose addiction and that is exactly the mechanism used by other man-made opiod drugs (like nicotine and cocaine). The trouble is that it seems the upregulating of dopamine at the expense of serotonin can become hard-wired if we allow it to go on for long enough. And once we’re addicted, we can’t help but let it go on for long enough.

We don’t run into that many bears on a daily basis (well, I don’t). Fructose was once about as common as a bear encounter, but is now embedded in almost every processed food we buy. And it has an addictive quality as powerful as nicotine.  We are now on a constant drip of fructose. That means we are on a constant cortisol (and therefore dopamine) high. This in turn continuously impairs our ability to absorb serotonin, the one substance that can turn our mood around. Fluffy will still become a bumper sticker if he chooses an inopportune moment to cross the freeway and that will probably be a downer. But the science is suggesting that how quickly (or if) we bounce back from that may depend on how much fructose we are eating.

As well as destroying the brain with an acute event like stroke (see the previous section), fructose can destroy our brains more slowly by causing dementia.

For a long time, researchers have known there is a strong relationship between diabetes and dementia. Estimates have varied, but you are approximately two to four times as likely to have dementia if you also have diabetes or a history of insulin resistance (the precursor to Type II Diabetes discussed above). Now a bunch of Swedish twins are starting to put some real meat on the bones of the diabetes link.

Almost 14,000 twins participated in a recently published study. The twins were part of the Swedish twin registry and were all over the age of 65. Because they had provided health data to the registry throughout their lives, the researchers had excellent information about their health over a very long period.

Twins are great for this kind of work because when one becomes ill but the other doesn’t; large tracts of potentially irrelevant causes are eliminated. Clearly the twins share the same gene pool and (usually) have been raised in an identical environment. When dementia sets in early, as it increasingly is (15,000 Australians under the age of 65 now have dementia), the number of possible causes is narrowed further. The study proved beyond any doubt that diabetes is associated with dementia (at least in Swedish twins). Even more interestingly, they concluded that the longer you have had diabetes (or insulin resistance), the more likely you are to develop dementia. In a somewhat depressing footnote, the researchers suggest their estimate (that you are 125% more likely to become demented if you are diabetic) is probably a bit light on because so many diabetics die before they are old enough to notice they are losing their grip.

Research published a month after the twin study took the issue further and established a direct link between consuming sugar and ‘impaired cognitive function’. Almost 3,000 people suffering from Type II Diabetes, aged 55 years and older took part in that study. They were subjected to a battery of tests (part of a standardised set used for detecting early signs of dementia) designed to measure things such as how fast they performed calculations, how well they multi-tasked and the accuracy of their memory.

The researchers then compared the results of the tests to measures of each person’s average blood glucose reading over time. They found that there was a significant correlation between a person’s score on the tests and their blood sugar level. The higher the blood sugar level, the lower their score on all the tests. Just to put icing on the cake, the researchers noted that a one per cent rise in blood sugar takes you two whole years closer to dementia.

Persistently high blood sugar is caused by insulin resistance, which in turn is caused by over consumption of fructose.  And the research is clearly suggesting the next step in that deadly cascade is dementia.  Perhaps we should rename Alzheimer’s disease, Type III diabetes.